On Monday, June 30, the TTC began the reconstruction of track at Broadview & Queen. This project is expected to last one month, although efforts will be made to reopen for Queen streetcar traffic by July 19.

As of July 4, the excavation work for the Queen Street legs of the intersection was complete and preparations for the foundation concrete layer were in progress. Excavation of the Broadview leg began this morning. Track panels and new tangent rail for the approaches are sit ready for installation just beyond the excavation area on all three legs.

The TTC has announced that streetcar service will resume through the intersection at about 3:00 pm on Saturday, July 19. 501 Queen and 504 King services will operate on their normal routes from that hour onward.

On Sunday, July 20, a separate set of diversions begins and the King car will only operate southbound on Broadview from Dundas to Queen. Service to Broadview Station will be provided by a shuttle bus.

On Monday, July 21, streetcar service returns to Kingston Road with the 502 Downtowner and 503 Kingston Road Tripper lines resuming operation over their full routes.

The north leg of the intersection is almost complete with only the top layer of concrete and final attachment of the new track to the existing tangent rails remaining. The Queen Street legs are now being excavated for new curb lane pavement.

For those who are wondering about the overhead: there are two sets of contact wire in place because the conversion to pan-friendly overhead is in progress.

Looking south on Broadview to Queen 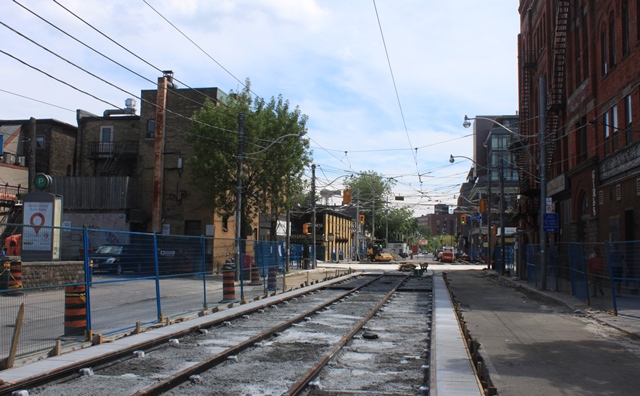 Looking across the intersection from the northwest corner.

The track panels holding the special work for the intersection were installed over the past weekend as well as the tangent rails for the Queen Street legs.

Looking south on Broadview to Queen

Looking west on Queen across Broadview

Looking east on Queen across Broadview 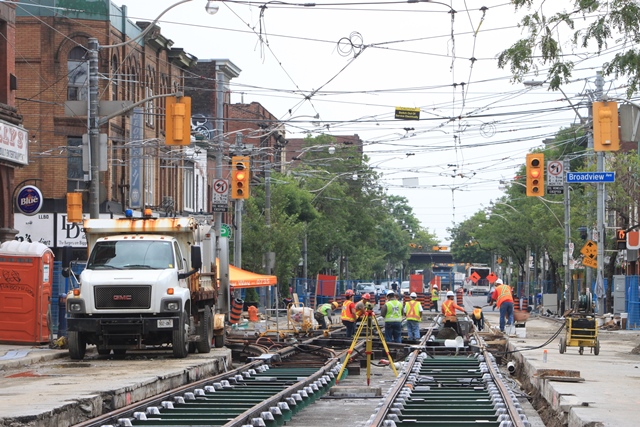 The Broadview Hotel is the most prominent building in Riverside, and for years it has been a low-end rooming house and home to a strip bar, Jilly’s, which is closing in a few weeks. The building has been bought by Streetcar Developments who plan a restoration, but have not yet decided exactly what will replace the current uses.

Across the street from the hotel is Dangerous Dan’s, home of outrageously large burgers and everything that goes with them.

Looking east on Queen toward Broadview. 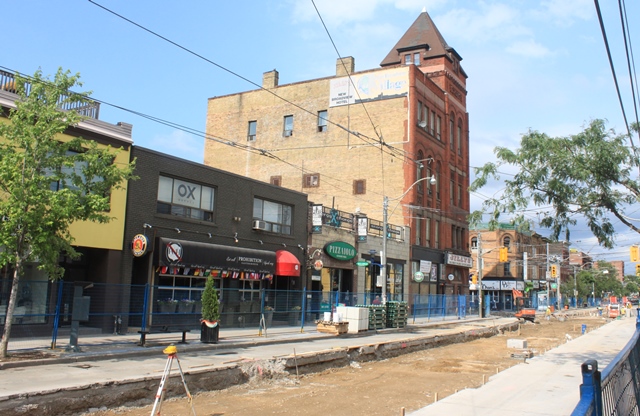