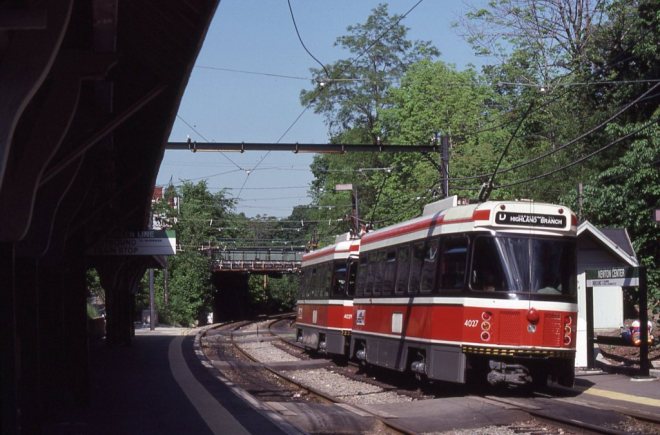 Back in 1980, the Urban Transportation Development Corporation (UTDC) had suffered the demise of their planned magnetic levitation train system in Toronto, and the “Intermediate Capacity Transit System” (ICTS) we know as the Scarborough RT had not yet been foisted on Toronto.

During a brief period when the only viable UTDC product was its new light rail vehicle, the CLRV, they shopped the design around to various systems.  The only taker they ever got was San Jose, California, for a small order.  Three CLRVs found their way to Boston for a demonstration, and I was lucky enough to catch them out on the Riverside line in May 1980.

A train of 4027 and 4029 prepares to leave Riverside Yard (the outer terminal of the line which includes a large parking lot and the carhouse/shops for the route.  A train led by Boeing car 3400 sits beside the CLRVs.  The overhead in Boston at this point was set up for operation by cars with either trolley poles (the remaining PCC fleet) or pantographs (the Boeing cars). 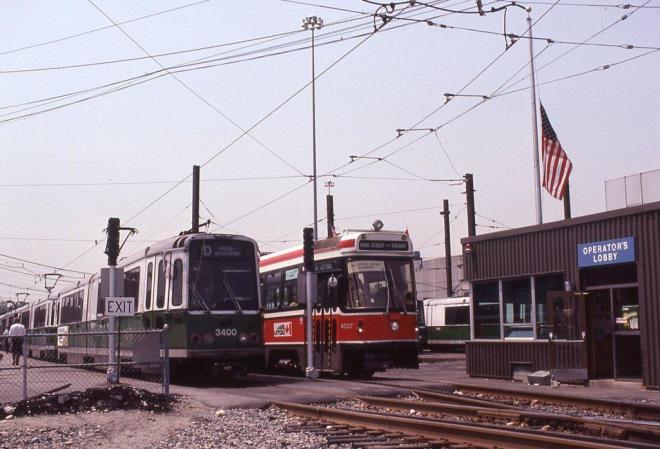 The CLRV train pulls out of the yard. 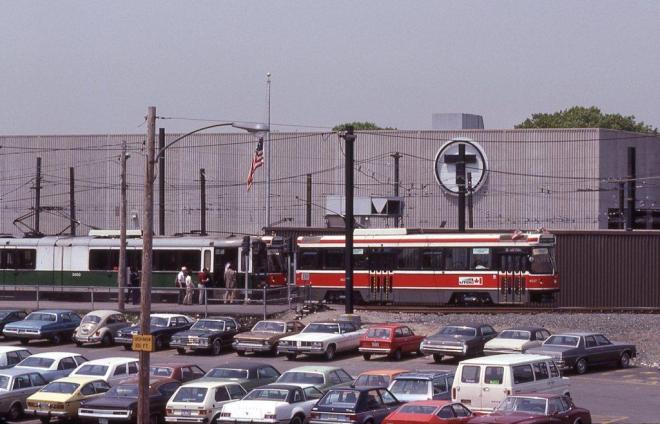 … and onto the main line. 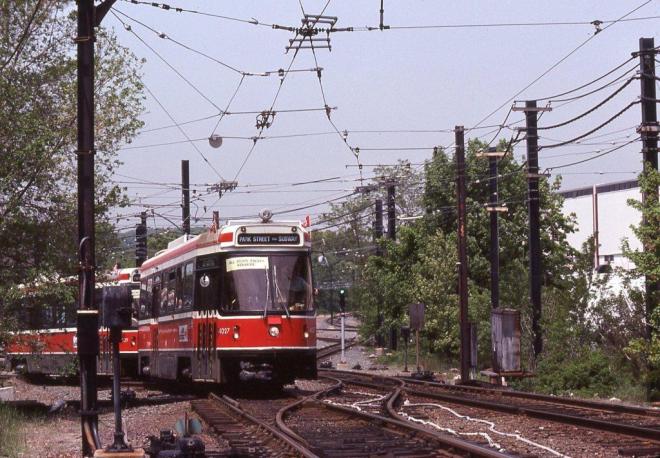 The Riverside Line was build on an abandoned railway corridor, the Highland Branch, and opened in 1959.  A new connection into the existing central subway (a streetcar subway dating from 1897) was built to bring cars through downtown.

Here the CLRVs pass outbound through Reservoir Yard.  The larger part of this yard and an old carhouse are out of shot to the left, and they serve the Cleveland Circle line which terminates there.  Work cars in the yard include a PCC converted for use as a line car, and several “Type 3” passenger cars adapted as snow plows, essential equipment for a network with so much private right-of-way. 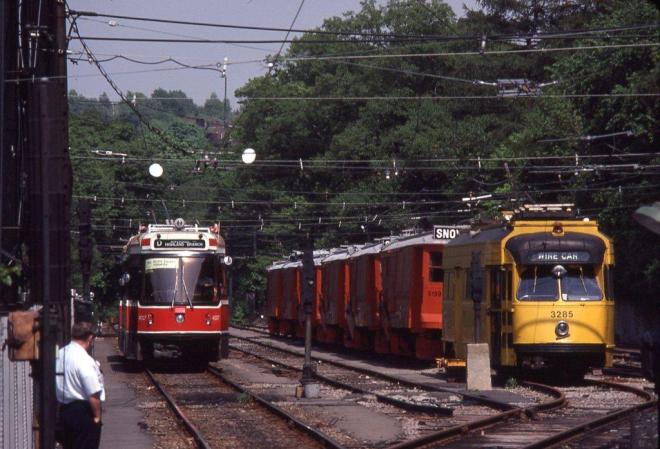 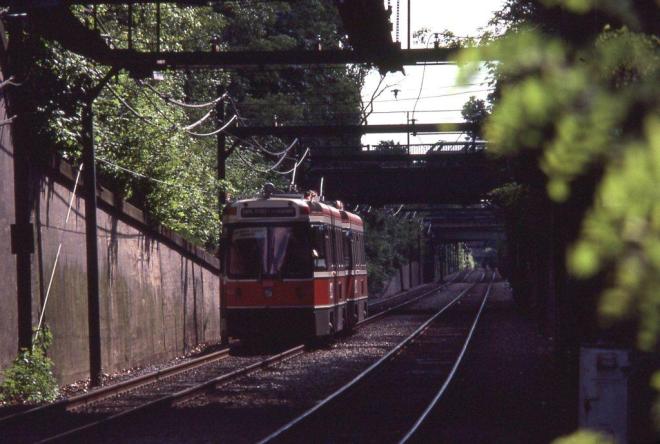 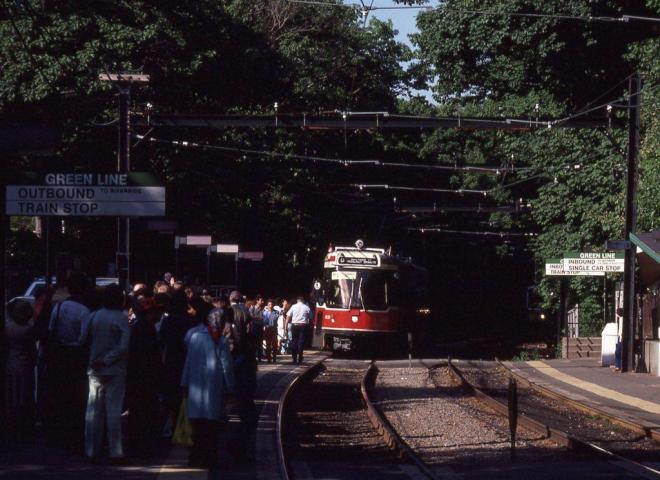 The shot below is from May 1972 at Kenmore Station which opened in 1932.  Readers with eagle eyes and long memories will recognize this shot which I loaned to the UTDC for inclusion in a brochure advocating the wonders of LRT which, at the time, the Ontario Government was actually pushing as a product, if not as a “solution” for Toronto.  It didn’t last long, and they went back to their old lies about how there was nothing to fill the gap, the missing link, between buses and subways — hence the need for an “intermediate” capacity system. 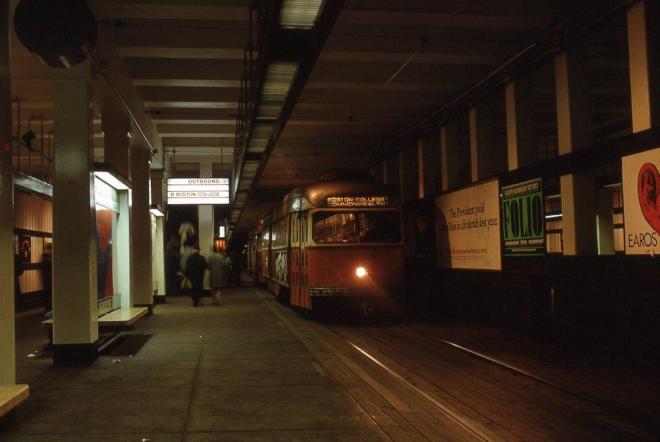 Kenmore Station is a busy place and has separate platforms for routes which diverge here.  Boston cars have doors on both sides so that they can serve island platforms like this.  Needless to say, the CLRVs served only stations with right-side platforms.  (The sign in the front window says “All stops except Kenmore” because the Riverside trains used the outside tracks at this station.)  Yes, that’s a three-car train of PCCs sitting at the platform. 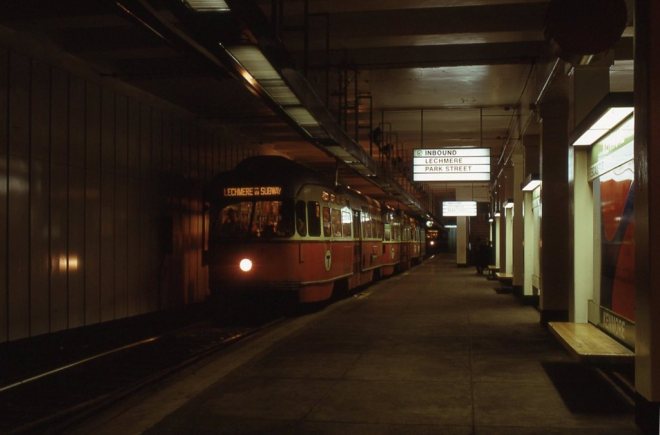 Finally, a look outward towards Riverside terminal (off to the left behind the trees in the distance)  in October 1968.  The small building on the right is an abandoned railway station.  This line could have been a model for the Scarborough RT, an implementation of “LRT” at the high end of what this technology can accomplish with almost complete grade separation, rapid transit station spacing, and speedy operation.  (Although the CLRVs are capable of 70mph operation — itself a design excess by the UTDC — they were limited to 50mph operation on the Highland Branch.)

By the time the SRT and its expensive ICTS opened at a cost more than double the original estimate for LRT, the Riverside line had been operating for 25 years. 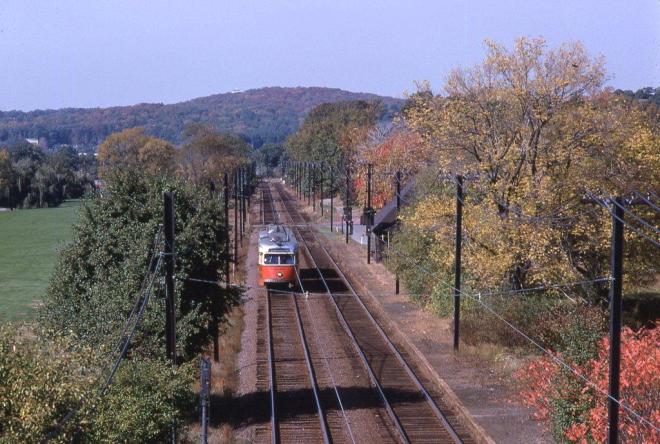