John F. Bromley sent me a photo of a new LRT line running through a commercial development.

The photo is from June 1972.  The cars were the first in Europe to be air conditioned.

This shows the kind of thing done with LRT in Europe even before the TTC reversed its anti-streetcar policy, about the time Queen’s Park decided that we needed an “intermediate capacity” system midway between buses and subways, and before the TTC collaborated with Queen’s Park in destroying an LRT plan that could have been built 40 years ago.

On May 27, TTC Vice-Chair Joe Mihevc staged a most unusual press conference at Christie Station.  The purpose?  To announce a new website, ttcpassengeraudit.com, where riders can report issues about the subway stations they use.

On July 17, 2010, volunteers who sign up for a specific station will audit their sites and post responses via an online form (available only in hard copy as I write this).  Topics to be reviewed include lighting, cleanliness, maintenance, way-finding, the station exterior and surroundings, safety and quality of ride (not strictly speaking a “station” related issue).

The need for customer-based reporting is an admission of failure in “official channels” to get things done.  Customers report lots of things to the TTC today, and some are even addressed, but many languish for months with no apparent action.  The TTC maintains web pages with information about escalator and elevator maintenance, as well as construction projects, but these cover the large, planned works, not day-to-day housekeeping.

Some issues, such as the long-standing closure of the “new” entrance to Broadview Station, are not listed on the TTC site at all.  (As a passing update, some work appears to be taking place, but very slowly, and the notices now claim the entrance will reopen by June 30, 2010.)  Riders should be able to get up-to-date information about the status of such projects online without counting on transit activists or Councillors to chase TTC staff.

The TTC hires an outside agency to audit its stations to give an unbiased view of what is happening.  Although there are goals for improvement, the index for the system as a whole inches up very slowly.  TTC claims that it is hamstrung by the availability of staff and things would be so much better if only there was a greater subsidy.  Whether the staff they have is properly managed and monitored is not discussed, at least not publicly. 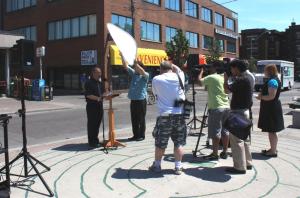 The press conference was unusual in that it had no TTC official presence, and it was conducted, at least initially, outside of the station.  It was very hot, and Mihevc’s assistant Anthony Schein held a reflector to act as a parasol.

Later, we all moved inside, and things took quite an amazing turn.  Strangely enough, the TTC had two workers on hand cleaning the station.  I had seen one sweeping the platform when I arrived, but upstairs there was another.  As Joe spoke, the cleaner was washing the glass of the Collector’s booth.  I have been riding the subway since it opened, and I have never seen this activity.  Maybe I just don’t frequent the right stations. 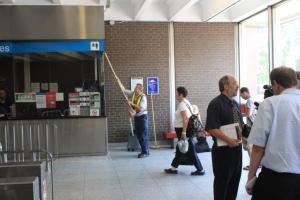 Note also that the signs in the booth window are all lined up.  If you look closely, you will see that only one of them is hand-written.

Meanwhile, elsewhere in the station, we have: 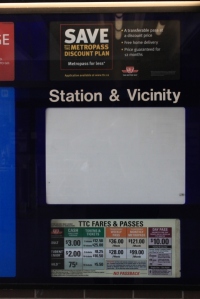 The long-missing vicinity map.  After the debacle of new and wildly inaccurate maps last September, maps that vanished in the blink of an eye once the problem was reported, the TTC assured us that new maps would be in place by November.  It is now May.

On the subject of removing and installing signs, the TTC has outdone itself in recent days.  An ongoing problem is that old signs are never taken down, they just fall down, eventually, after being vandalized, shredded, or just slowly crumbling off of the wall.  Last weekend, there was a subway diversion at St. George, and posters announced the temporary routing.  Starting this weekend, there are nightly shutdowns of parts of the Yonge-University line.  Signs for the new diversion were installed days after the St. George diversion ended, but the old signs remain in place.

At Broadview, main level, they are side by side.  At the mezzanine level, the St. George notice occupies pride of place at the foot of the main stairway in front of the newsstand, while the YUS notices are tucked away in corners. 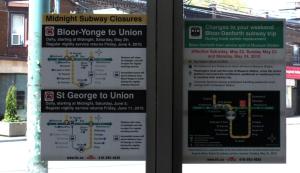 Why is it not possible to take down out-of-date notices, especially when the space could be better used for current information?  How long will these two signs languish at my station?  Will we give a prize for the station with the most out-dated signs or maps?

Riding over to Christie Station, I was on a train that was not just dirty, the exterior was black.  The fleet number on one car was covered with a tag, and many people had “finger painted” in the dirt on the windows.  Indeed, I started to notice how few cars did not have such “inscriptions”, and was astounded a day later to see a train that was almost gleaming, the only freshly-washed train I have seen in months.  The problem seems to exist mainly on the Bloor-Danforth line.

This train is fairly typical of BD-line equipment.  Dirt streaks run down from the roof, and although it’s not immediately obvious, the windows are coated with dust.  Our stations may be spotless, but from inside the trains, it’s like looking through a fog.

This car has beautiful clean, shiny doors.  That’s the colour the whole thing is supposed to be.  Maybe not mirror-bright, but a decent silver, not a shoddy imitation of pewter.

This shows a common problem with doors on cars that are somewhat cleaner than average.  There is an area at the top of the doors that simply doesn’t get scrubbed clean.

[Technical note:  These photos were taken in Old Mill Station using daylight that came in through the north window on a cloudless late afternoon.  You can see the exterior lighting condition in each of these photos, one way or another.]

Joe Mihevc wants riders to have a sense of ownership in their system.  At times, riding the TTC is like living in a run-down apartment building where I want the place to look nice, to be proud to bring friends, but the landlord has excuses for not doing anything.  There is even  plaque in the lobby congratulating him for the condition of his building.

When the TTC starts to care about its system again, when it stops using the “we need more money” excuse as a blanket response to every criticism, riders might really feel they are part of the TTC.