This update includes a reply from Metrolinx detailing the nine-month contractor delay he cited in his announcement of the 2022 opening for the Crosstown, as well as additional information on delays to the project.

Metrolinx Metrolinx Media Relations provided additional information on the status of work at this point in an email on February 20, 2020.

Based on CTS’s original schedule, 30% design packages for the majority of stations (the first step in the final design process) were to have been completed and approved by December 2015/January 2016.

With the exception of Keelesdale station, none of that work was completed until March 2016 or later, and in the case of Eglinton station the 30% design was rejected due to design deficiencies.

It’s also important to note, that other key aspects of design, such systems design components, were also delayed significantly.

Despite the known delay at this point, this was not mentioned in public reports in following months.

While the update explains some of the issues CEO Phil Verster referenced in his announcement, it does not explain the reason why the in service date continued to be cited as September 2021 well after Metrolinx knew that this was not likely or possible. The opening date has been cited publicly and is included in TTC’s 2021 budget and bus fleet plan.

Internal Metrolinx status reports from September 2019 show that the problem at Eglinton Station was already a known issue as were problems with ground water at Avenue Station and a conflict with CPR at Mount Dennis, among other construction-related delays. The estimated substantial completion date was already in 2022, and it continued to move later in the year to at least May 2022.

Moreover, the claim by Minister Mulroney that proposed legislation would have accelerated this project by three years remains completely unsupported by the actual project chronology.

Updated February 21, 2020 at 7:00 pm: Metrolinx has confirmed that “substantial completion” includes commissioning so that revenue service can begin.

On February 18, Transportation Minister Caroline Mulroney introduced the Building Transit Faster Act which is intended to speed up progress on the four key Ontario transit projects in the Toronto area: The Ontario Line, the Eglinton West LRT extension, the North Yonge subway extension to Richmond Hill, and the Scarborough Subway extension to Sheppard.

The day before, February 17, the Star’s Ben Spurr reported that the Crosstown line’s opening would be delayed until “well into 2022” according to Metrolinx CEO Phil Verster. This delay had been rumoured for some time, but was denied by Metrolinx until now.

Metrolinx published a statement on their website including photos showing unexpected conditions discovered on the Yonge Subway tunnel structure at Eglinton Station that were responsible for part of the delay.

The statement also includes a claim that the consortium building the project, Crosslinx Transit Solutions started work “nine months later than planned after contract award in July 2015”. This does not align with actual events as shown later in this article. I expect to receive a clarification from Metrolinx on this matter soon.

During her press conference, Minister Mulroney claimed that the Eglinton Crosstown project would have opened three years sooner had the provisions of the Act been in place. This claim is hard to believe considering the nature of the delays we know about, the types of delay addressed by the legislation, and the actual chronology of the project.

Eglinton and other projects have faced numerous hurdles, but these have overwhelmingly been political and financial.

To sort this out, I have assembled a history of the Eglinton Crosstown.

Eglinton had been identified as a priority corridor in the 2003 Ridership Growth Strategy with the central section from Mount Dennis to Don Mills flagged as “Overcapacity in 2011 but requires alternate priority treatment”. 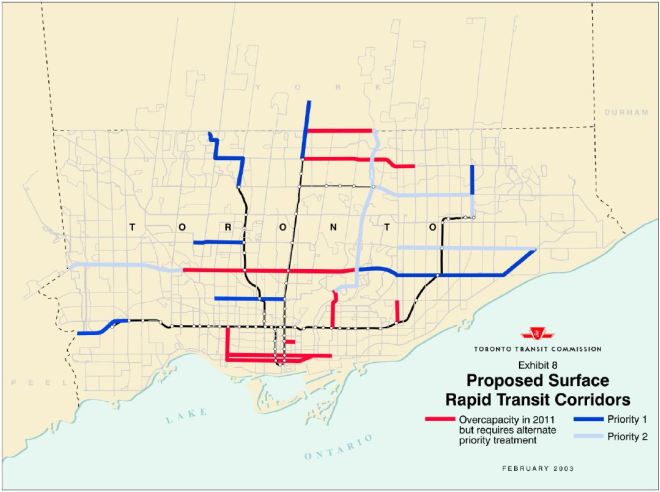 That the TTC and City Planning staff jointly review the Official Plan’s designation of “Avenues” and “Higher Order Transit Corridors” and develop a plan for a transit network that supports the Official Plan. This review should include the examination of all modes including LRT.

That staff be requested to develop an LRT Master Plan identifying the best short term and medium term opportunities for introducing LRT to augment ridership growth.

The concept of a city organized around its transit network was presented to the TTC Board. It included a number of surface transportation options, and was designed to link with the city’s Official Plan. Its goal was:

No one should be disadvantaged getting around Toronto if they don’t own a car.

This report included many proposals, but few of these were ever implemented. Among them was a transit priority scheme for King Street that was not implemented, and then in a reduced form, until November 2017.

The Transit City Light Rail Plan was launched in March 2007. It included a network of mostly suburban LRT lines, but did not, at that point include replacement of the SRT with LRT technology.

May 21, 2008: The project plan called for early works to take place between 2008 and 2012 with construction in 2010 to 2016. The project plan below summarizes the timelines of the projects. Apologies for the resolution as I do not have an original copy to make a better scan.

November 2009: The TTC Board and Council approved the Transit Project Assessment for the Eglinton Crosstown LRT.

March 25, 2010: The provincial budget announces deferral of early spending on Transit City and a takeover by Metrolinx of responsibility for the projects. $4 billion was cut out of the first five years of the plan, and that required changes of scope and timing. Needless to say, the City of Toronto was not amused. The chart below was part of a letter from Mayor David Miller to Premier McGuinty comparing the original and revised plans. At this point, the opening date for Eglinton Crosstown was pushed out to a range of 2019-2022.

May 2010: Ministerial approval for the project is granted.

May 19, 2010: The Metrolinx Board considers a report on the Five-in-Ten scheme for the “Big 5” transit projects with three projects – Sheppard LRT, Eglinton LRT (Kennedy to Jane) and York Region VIVA – to proceed immediately. The Scarborough and Finch LRT projects would follow in 2015-2020.

The basis of the new plan was to reduce provincial spending in the first five years, and to trim the overall phase 1 requirements to fit within previously announced budgets. Work on the Scarborough LRT would not start until 2015 after the Pan Am Games.

Note that the new plan had been in the works for a few months (February) before the budget announcement in March and the Metrolinx report in May 2010. 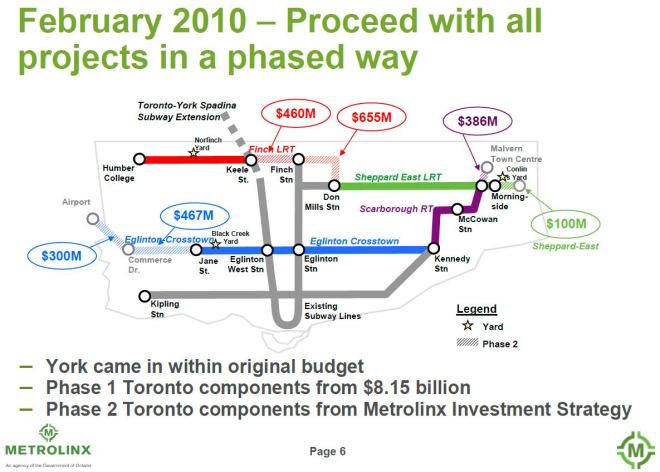 June 2010: TTC purchases four tunnel boring machines for the Eglinton project. These were subsequently taken over by Metrolinx.

December 2010: Rob Ford becomes Mayor of Toronto and cancels Transit City. Despite this, work on the Eglinton project continues although it was delayed.

December 2011 to February 2013: A series of public meetings were held to review station designs along the Eglinton corridor.

2013: An addedum was filled to the Environmental report changing the scope of work. The western terminal for phase 1 was shifted east from Jane to Mount Dennis, and the alignment for that segment was revised to avoid the narrow section of Eglinton Avenue west of Weston Road. This is now part of phase 2 and would be built underground.

June 27, 2013: Metrolinx Board Rapid Transit update. The planned schedule for the Eglinton project is

June 26, 2014: Metrolinx Board Rapid Transit update. There were two qualified consortia coming out of the RFQ process, After a 42 week “in market” period, submissions were expected in October 2014.

September 2014: A construction update at Metrolinx noted that station construction was expected to begin in spring/summer 2015. Some early work for station headwalls was already underway, although this was complicated at some locations by utility relocations that had to occur first.

Eglinton Crosstown LRT – 19 km Crosslinx Transit Solutions (Crosslinx), the consortium delivering the Design-Build-Finance-Maintain (DBFM) contract, will submit a 30% design scheme for each Crosstown station. The first design scheme for Keele Station was submitted in December 2015 and is currently under review by Metrolinx, the TTC and the City of Toronto. The remaining station designs will be submitted by Spring 2016.

This appears to be a perfectly normal early part of a Design-Build process where design work that would traditionally have been done by the buyer (TTC or Metrolinx) is performed by the consortium that will build the project.

April 27, 2016: An update on the LRT project status reported various past and future events:

June 28, 2016: A Metrolinx Board report on capital projects notes that construction on the stations began on March 1, 2016 and that the opening date would be in 2021.

The 2021 completion date appears in regular reports for the next three years.

June 27, 2019: Last of the quarterly reports to include in service dates for projects and the 2021 date for Eglinton Crosstown. Reports later in 2019 did not include any dates for project completions.