Construction projects and the ongoing shuffling of streetcars and buses between the 500-series routes will bring some changes over coming months.

The planned switch to streetcars on 505 Dundas has been deferred to late April, and buses will continue to operate on this route.

In turn, streetcars will remain on Bathurst until Dundas switches to streetcars.

New overhead poles have begun to appear on Broadview at locations where the curves must be rebuilt for pantograph operation.

Streetcars will return to 505 Dundas replacing buses that have been on this route for quite some time thanks to various construction projects. The route will operate with pantographs up over much of its length, but on arriving at Dundas & Broadview, cars will switch to trolley pole operation. TTC staff will be stationed at the changeover point to raise and lower poles as cars arrive in each direction. This procedure will continue until the overhead from Gerrard to Danforth is fully converted to a pantograph-friendly design over the next few months, according to the TTC.

The option of running with poles over the length of the route is not available because some of the new overhead on Dundas is built to pantograph-only standards and is incompatible with trolley shoes.

On the same date, 511 Bathurst will revert to bus operation because of construction on the Bathurst Street bridge south of Front Street, and later for track replacement between Dundas Street and Wolseley Loop (north of Queen), and from Bloor Street to London Street (Bathurst Station). Diversion arrangements for these phases of the work have not yet been announced.

While the bridge remains open to traffic, the buses will operate to Exhibition Loop, but will travel via Fort York Boulevard rather than going south to Fleet Street.

After the bridge closes, the 511 Bathurst buses will loop via Front, Portland and Wellington. Service to the Exhibition will be provided only by 509 Harbourfront which will have extra service to compensate for the 511’s absence. The 307 Bathurst Night Bus will operate to the Exhibition via Front, Spadina and Fort York Boulevard.

Details of service during the Canadian National Exhibition have not yet been finalized.

Reconstruction of the west end of the 506 Carlton route will begin, and the route will convert to bus operation.

The work will begin at High Park Loop which will be rebuilt so that it can be used by either streetcars or buses. Once this is done, the 41/941 Keele diversion that begins on March 29 for work at Keele Station will change to terminate at High Park Loop rather than heading east to Roncesvalles.

The track replacement will head east on Howard Park from Parkside to Sunnyside, but will not affect the intersection at Roncesvalles. This  means that 504 King service to Dundas West Station will remain in operation.

During the bus operation, overhead conversion for pantographs will continue on this route.

With the 506 Carlton operating as a bus route, the 503 Kingston Road will resume streetcar operation. Its western terminus will be Charlotte Loop at Spadina.

Track reconstruction on Dundas Street will begin with the Howard Park intersection. Tangent track will be replaced between Sorauren Avenue and Sterling Road, the stretch spanning the bridges over the rail corridors. While this is underway, the 505 Dundas car will (probably) short turn at Lansdowne via College Loop (the triangular intersection formed by Lansdowne, College and Dundas) or via Lansdowne, College and Ossington.

The work will also include the west side of College Loop (the only part of the loop that has not been rebuilt in recent years). This will include reconfiguration of the intersection with traffic signals and pedestrian crossings as shown below.

These arrangements have not been finalized. 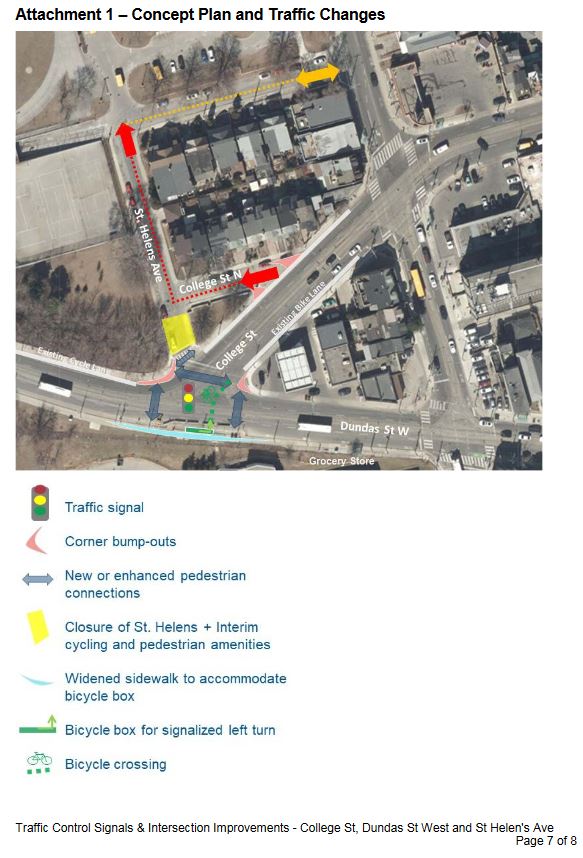 Other projects that do not affect scheduled service include: