The TTC has several changes planned for the schedules going into effect on March 29.

Updated March 5, 2020 at 10:20 pm: Incorrect information was in the original description of the 163 Oakwood route. It will operate from Ossington Station to Lawrence West Station, not from St. Clair as the southern terminus as I had originally described it. Thanks to reader Joseph (who got there first) and others for spotting this. I am not quite sure where that idea came from, but both the article and the detailed list of changes below have been updated.

Updated March 6, 2020 at 10:55 pm: Incorrect naming of the 109 Ranee branches corrected. Thanks to reader Steven for spotting that.

The most significant change is the restoration of streetcar service on 505 Dundas after a long absence due to watermain construction and the shortage of streetcars. The new service plan represents an increase in capacity primarily in the off peak periods. The change in headways will be most noticed during the peak periods where there will be 6.9 new streetcars/hour in the AM, and 7.7 cars/hour in the PM as compared to 16 buses/hour AM and 15 in the PM. Of course the buses tend to travel in packs of two or three, and so the waits for service could be more comparable than the raw schedules suggest especially if the TTC manages to maintain proper vehicle spacing on these much wider headways.

Changes during off-peak periods are not as substantial, and the net effect will be an increase in capacity on this route

A related problem is that the TTC has extended the travel times for streetcars substantially over the bus times in some cases (and the bus schedules were themselves adjusted in Mid-February 2020). This could leave many streetcars with a lot of excess time at terminals where it is now common to see several buses laying over because they are early. I will publish an analysis of actual travel times for both bus and streetcar operations as data become available.

Service on Dundas will be supplemented by four bus trippers in each direction during the period from 8 to 8:30 am.

With 505 Dundas switching back to streetcars, the 511 Bathurst route changes to bus operation for various construction projects including work on the bridge over the rail corridor at Front, utility and track work from Front northward, and track work from Dundas to just north of Wolseley Loop (north of Queen). According to the TTC service change memo this will persist through all of 2020 implying that the streetcar service to the CNE will be provided only on the Harbourfront line this year. I have asked the TTC for service details, but they have not responded.

The bus loop roadway at Keele Station will be under construction until mid-October 2020. During this period all services that normally terminate here will be redirected.

The bus loop at Eglinton West Station (to be renamed “Cedarvale”) will close for work on the Crosstown project. This will trigger several changes:

Passengers on the 32 Eglinton West bus will make connections to and from the subway from on street stops in what is already an area poorly set up for pedestrians. How this will operate with all of the additional foot traffic after March 29 remains to be seen.

The TTC continues to “improve” routes by adding to running time and widening headways. Their claim is that they are just matching actual conditions, but what happens is that they aim for almost worst case situations (95th percentile) causing most vehicles to run early and bunch at terminals. From a rider’s point of view, service is less frequent most of the time.

In one case, on 7 Bathurst, the TTC is clawing back excessive running time. During peak and weekday midday periods, there will be one bus less on the route, but scheduled headways stay the same. During the evening the number of buses and headways are unchanged, but some scheduled driving time is converted to make “recovery” time even longer than it is now.

Due to trackwork at Roncesvalles Carhouse, there will be no access to the “North Gate” exit onto Roncesvalles for at least the remainder of 2020. Some services will be shifted among carhouse to allow for the reduced capacity at Roncesvalles. 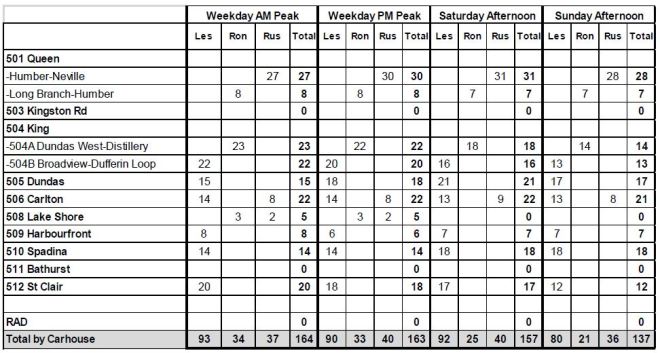 The TTC continues its practice of scheduling services at crowding levels above the board-approved standards. This occurs in some cases due to vehicle shortages, but more commonly because of budget pressures that do not allow provision of service at the level the standards would require.

New periods of scheduled crowding added on March 29 are:

TTC management are supposed to be reporting regularly to the Board on routes that exceed crowding standards, but this report has not yet appeared.