The TTC Service Standards, adopted in May 2017, set out the target loads for each type of vehicle and period of operation. 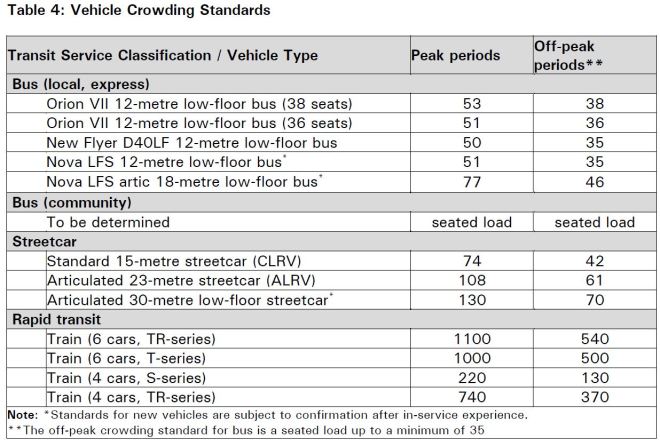 TTC does not regular produce route-by-route loading or crowding stats, and the Quarterly Crowding Report is an attempt to address the Board’s desire for more information.

The TTC has now provided the details behind the summary report. These reveal where and when the problems exist as well as situations that could be addressed by service redesign.

One important aspect that shows up is that for routes with express and local branches, the crowding situation is uneven between them. Overcrowding might exist on only one branch indicating an inbalance in service levels, or it might be on both branches showing that more service is required overall.

Where a service is only slightly above the standard, the situation is usually “wait and see” whether demand continues to build. For example, a peak bus service with regular-sized vehicles has a standard of about 50 passengers on average over the peak hour. A change of 1 person represents a 2% change in loading.

A major problem for riders, however, is that service is rarely evenly spaced, and some buses will have many more than the standard load. The “average” rider sees a crowded bus even though a half-empty one might only be minutes behind. Telling them that “on average” their bus is not full is cold comfort. Unreliable service is as big a TTC problem as getting the resources to operate the system because it affects the credibility of the transit option all over the city.

Overcrowding on the 501 Queen car is a concern given plans to replace the existing service with all low-floor equipment on June 23. The actual increase in scheduled capacity will be small because although larger cars will serve all trips, they will come much less often (9.2 cars/hour on the new schedule vs 14.1 cars/hour on the existing one). Many 501 Queen trips are already served by the larger low-floor cars, and the new schedule actually represents a decrease in capacity when this is taken into account.

Crowding on the SRT cannot be addressed until 2020 when the fleet rebuild will be complete and the full 7-train fleet is available for service.

In the off peak, many routes are running well over the target seated load standard. The TTC often cites a shortage of vehicles when talking about constraints on better service, but these are all off peak operations when spare vehicles are available. The lack of improvement is more a political issue – staffing and budget – than an operational one. The current city funding crisis will only further limit the TTC’s ability to improve services even when they have vehicles available to do so.

In the chart  below, the periods of operation are abbreviated: 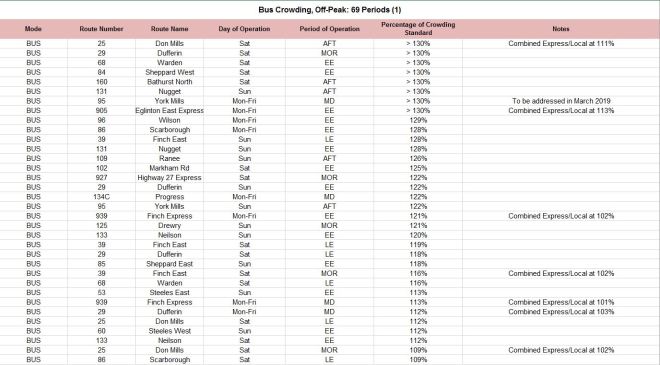 On the streetcar system, there are proportionately more route/period combinations that are over capacity than on the bus network. This is a direct result of the long-term shortage of vehicles and the lack of service improvements for many years. Worth noting in this table is that low floor operation is coming to 506 Carlton in the fourth quarter of 2019, and to 505 Dundas in the first quarter of 2020 thanks to the completion of Flexity deliveries. The status of the 502/503 Kingston Road services is still uncertain. 511 Bathurst returns to streetcar operation on June 23, and the 501L Long Branch service will switch to Flexitys in the fall.

Although the table below shows that off peak crowding on the SRT is “to be address by June 2019”, in fact the schedules for June 23 contain no change for Line 3 Scarborough.

The problem with summaries is that crucial details can be left out, and the actual situation riders face can vanish within averages that combine what is good in the system with what is not. Riders ride real routes at specific times, and good performance on other routes and other times don’t do them much good when they cannot get on a vehicle. From a political point of view, it is useful to know where the problems are because the more parsimonious members of Council and the TTC Board often regard transit service as excessive and wasteful.

In an era when there will be many discussion about “efficiency” and varying opinions on what quality of transit service riders deserve, let alone what governments will fund, understanding current demand levels is a crucial part of any debate. Transit routes provide service. Even in areas and at times when specific services are less-used, the vehicles are still part of a wider network. Roads do not disappear overnight when fewer people use them, and transit must strive to serve all of the city, not just the parts that will bring “high productivity”.