Updated February 5, 2018 at 2:30 pm: Charts showing comparative travel times between Jarvis and Bathurst for the period from March 2016 to January 2018 have been added to give a longer context to the effects of the King Street Pilot. Scroll down to the end of the article for the charts and commentary.

This article updates previous posts about the effect of the King Street Transit Pilot on TTC vehicle movements.

Please refer to previous articles for commentary on the transition from the pre-pilot to pilot results and for the period up to the end of 2017.

Toronto’s weather has been much harsher this winter than in previous years, and this affected some aspects of service quality through late December and early January, notably headway reliability. Low temperatures were not kind to the older streetcar fleet, and snow affected traffic conditions over the full route, not just in the pilot area. [Source, Environment Canada historical data for “Toronto City”]

Data for January 2018 show that the travel times through the pilot area between Jarvis and Bathurst Streets continue to be both below the pre-pilot values, and generally without the day-to-day “spikiness” in the range of typical travel times.

The sample below shows the travel times for westbound vehicles crossing Jarvis Street between 5:00 and 6:00 pm from September 2017 through January 2018. Horizontal lines give the daily values, while vertical lines bound periods where conditions changed. 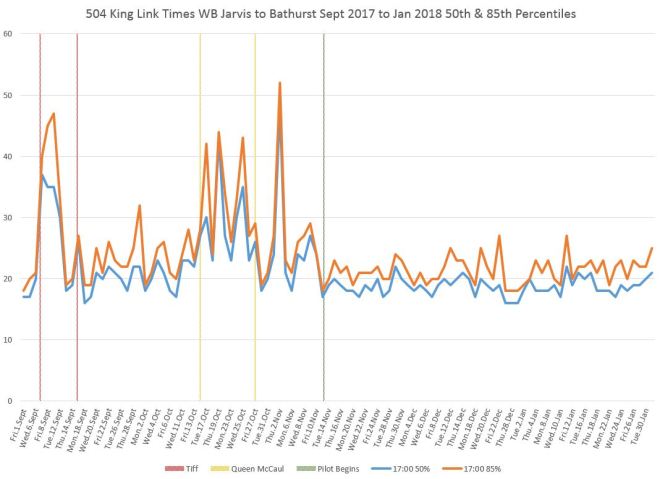 The two sets of charts linked here contain data for five representative hours of operation starting at 8:00 am, 1:00 pm, 5:00 pm, 8:00 pm and 10:00 pm. These are in the same format as previous charts except for the addition of one month’s data.

Within the January data, there are two peaks showing that a delay of some kind occurred.

On January 3 in the mid-evening, service was blocked west of Yonge Street for over half an hour. Most of the service diverted via Church and Spadina (visible in the chart below as lines that disappear between Jarvis and Yonge, then reappear at or west of Spadina). The cause of this delay is unknown as no service eAlert was issued for the delay or diversion 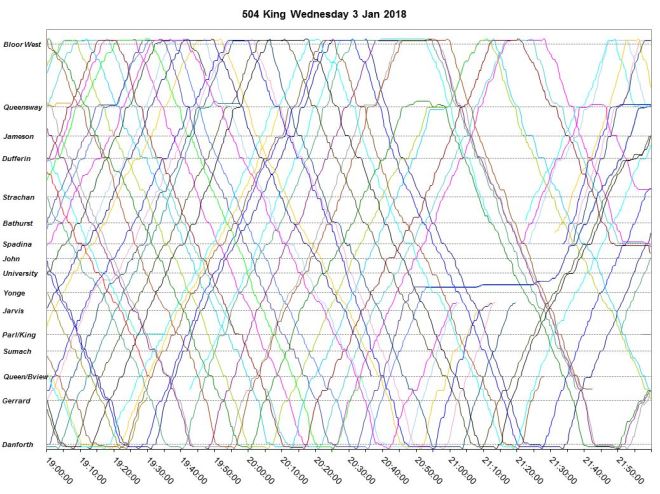 On January 30, a stalled bus (according to the eAlert) held service eastbound at Church from about 5:45 to 6:10 pm. A few cars diverted via Spadina, Queen and Church. The reason for congestion eastbound between Yonge and Jarvis beginning at about 5:10 pm is unknown.

Also worth noting here are: 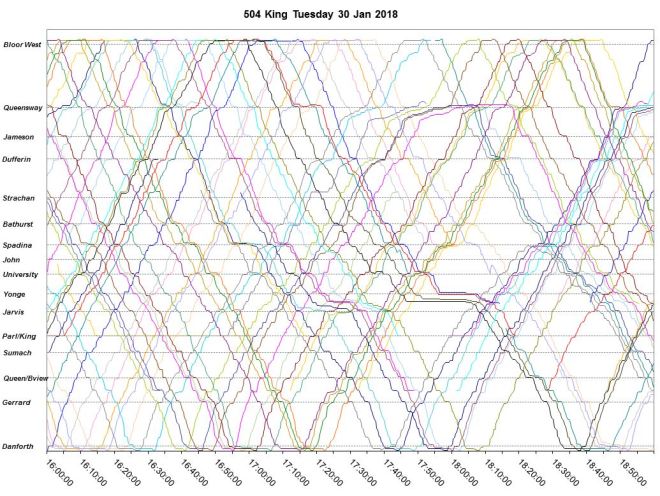 The additional data for January 2018 show a slight growth in the total route capacity at key points through the gradual replacement of CLRVs (standard length, old streetcars) by the double-length Flexitys. Mid-February will bring changes in the timing of 504 King Trippers, conversion to streetcar and extension of the 503 Kingston Road car (not included in these charts), and improved shoulder peak service on 514 Cherry.

However, the primary contribution to improved capacity will come with the substitution of Flexitys for CLRVs as each changeover doubles the capacity of the affected trips. This is visible in the growing yellow (Flexity) band in the sample chart below. 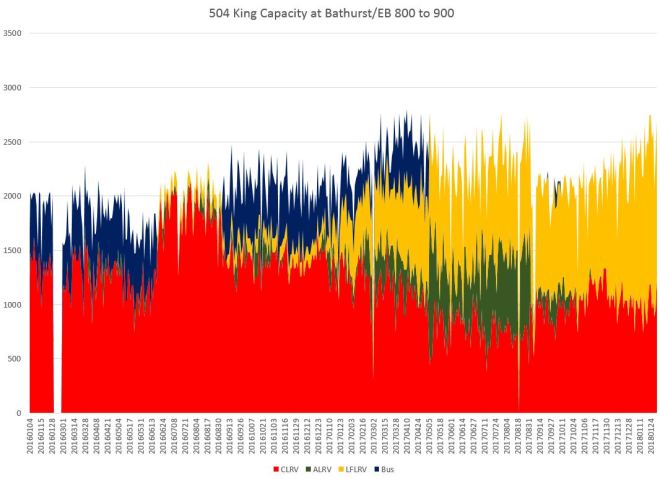 Please refer to the previous article about capacity for detailed comments on the evolution of the values shown here.

Irregular headways continue to be the TTC’s weak point and bunching is a chronic problem. The King Street Pilot reduces the wide, pre-pilot swings in travel times and this, in turn, reduces the need for short turns. That is a benefit to riders on the outer end of the route, especially during periods of less frequent scheduled service. However, bunching from terminals remains a problem.

In a previous article, the distribution of headway values was presented with daily data to show just how variable the riding experience (or more accurately, the waiting experience) can be. Here is the data for Yonge Street westbound in the hour from 5 to 6 pm. Each colour represents a two minute band of headways, and the height of each colour shows the percentage of trips from the total. For example, on the right side of the chart, Wednesday, January 31, half of the trips passing Yonge westbound between 5 and 6 pm were on a headway of 2 minutes or less, at a time when the scheduled service is 4’20”. This is not uncommon as data for earlier dates show. 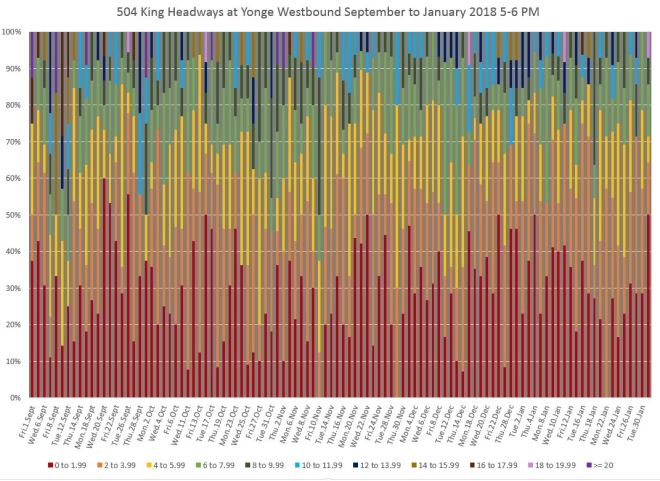 A  more dramatic version of the same chart presents the same data as bands rather than columns. This version makes it more difficult to pick up individual values, but demonstrates the degree to which very short headways (red) and longer headways (dark green bands and above) are prevalent.

Although I am not generally in favour of averaging because it can hide details, I opted to shift to weekly rather than daily consolidations to concentrate on the longer term pattern for this month’s review of data. The target headway for this period is just over four minutes, and so the orange and yellow bands are the area where service would be expected to fall. The bands from turquoise onward (10 minute or greater headways) are the least desirable, and they were notably wider during December. The prevalence of long headways was reduced in January, but it will take more months’ experience to determine what the typical numbers are. In reading the full sets of charts, the target headway for each period should be kept in mind, and therefore the colours where one would hope to see most of the service. 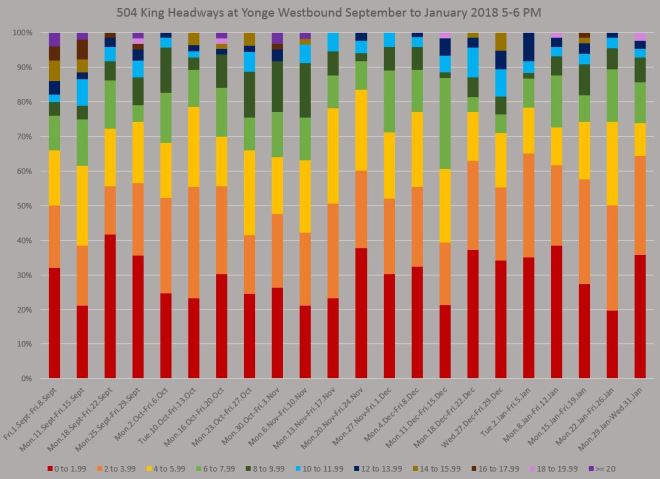 Please refer to the previous article on headways for detailed comments on sections of the route.

The charts for service inbound from the terminals (Danforth SB and Bloor West SB) show some reduction in the prevalence of very wide headways in the pilot period, but this is far from uniform. Shorter headways at terminals indicates that fewer trips are short-turned before they reach the end of the line, a result of shorter and more reliable travel times through the pilot area.

At Yonge Street in both directions, the range of headways is considerable especially outside of peak periods.

Similar patterns are evident at other locations and directions.

To give more context for the effects of the King Street Pilot, I expanded the travel time percentile charts to cover the past two years. [This runs from March 2016 as I do not have the February 2016 tracking data for 504 King.]

The chart below is the same format as the sample earlier in the article, but with a wider date range. This also picks up two events that affected travel times:

During the 8-9 am hour, travel times are slightly higher once the pilot begins. This happens because there was no AM peak congestion pre-pilot, but the change in stop locations added a westbound stop at Jarvis that was did not exist before. There was no offsetting change at the west end of the pilot because the stop at Bathurst remained nearside.

This should be remembered as a general issue for all time periods where demand would be sufficient to occasion regular stops at Jarvis westbound as the savings in travel across the pilot area are slightly offset by the extra stop within the pilot area.

During the evening periods, and especially in the 10-11 pm hour, a regular pattern of longer travel times on busy club district nights is quite evident. This effect is shaved off by the pilot’s reduction of conflicting auto traffic.

Midday travel times, 1-2 pm, are slightly lower with the pilot than before.

PM Peak times, 5-6 pm, are also improved slightly, although not as much as for westbound travel. The primary benefit is the substantial elimination of the spikes in values.

Evening travel shows a similar effect as well as the appearance, as in westbound data, of regular club district effects in the pre-pilot data.

Shifting the Stop to Farside at Jarvis Westbound

The effect of the relocated stop can be seen in travel times for the route segment from Parliament to Jarvis. Here are the data for November 2017.

The stop was actually moved in the week preceding the pilot, and so the travel times changed on Wednesday, November 8 for the am peak. The stop service time was no longer charged to this segment and is actually added to the Jarvis to Bathurst times as shown above.

Tuesday, November 7, shows no data for the PM peak and early evening because all service was diverting via Queen and Parliament. Due to the way the route is mapped in my software, cars did not actually “cross” Parliament during this period and therefore there were no trips between this point and Jarvis Street to measure.

The time saving, as measured by the 85% percentile line, is about 2 minutes varying by time of day. This is an additional saving for westbound travel in the pilot area. In turn, this begs the question of whether times should be measured from somewhere west of Bathurst to east of Jarvis to pick up the full effect, including any delays eastbound at Bathurst due to the extra left turning traffic. A topic for another day.