The TTC Board met on July 11, and the public agenda contained little that prompted extensive debate. The entire meeting was over in 75 minutes, a quite unusual situation reflecting the onset of the summer break at City Hall.

The status of the streetcar order from Bombardier prompted a spin-off discussion of the subway. CEO Andy Byford had noted that reliability on the Yonge line’s fleet of TR (Toronto Rocket) trains has reached a world-class level, and it is quite substantially better than that of the T1 trains operating on Bloor-Danforth, although their performance is reasonable for cars of their age (about 15 years) and technology.

This prompted a question from Vice Chair Alan Heisey who asked when the TTC should be making plans to replace the T1 fleet. Chief Operating Officer Mike Palmer replied that “we probably had to order the cars last week”. (See YouTube video of meeting.) This came as something of a surprise to the Board thanks to the way that planning for the Scarborough Subway Estension (SSE) and Line 2 BD in general have been handled, with information dribbling out bit by bit, and with plans in the TTC Capital Budget not fully reflecting future needs.

I wrote about this in a previous article, but as an update, here is the status of various projects related to the BD line’s future.

There are four major components to upgrades facing the TTC for subway expansion on Line 2 Bloor Danforth. Here is their status:

This is not simply a matter of TTC management providing a rosy view of capital needs, or of the City choosing to ignore the scope of the problem. When projects of this scale don’t appear in the “to do list”, they are not considered any time another government comes calling with a funding offer. Many projects that will receive money from Ottawa’s infrastructure fund (PTIF) are on that list because they were acknowledged as part of the TTC’s outstanding requirements.

Keeping the full needs of the Bloor-Danforth subway out of view short-changes the TTC system and the riding public, and politicians are surprised to find that the “ask” for transit spending is a lot bigger than they thought. Meanwhile new projects make claims on “spending room” that might exist only because needs of the existing system have been downplayed.

TTC management plans to bring a consolidated report on the renewal of the Bloor-Danforth line to the Board in September 2017.

The need to order cars “last week” arises directly from the evolution of the subway fleet plan, and the changes forced onto it by the SSE. First, a brief description of the existing subway fleet.

The TTC owns two types of subway car, with one sub-type:

The project description for the T1 replacement:

In order to provide a reliable public transit service and meet future ridership forecasts, it is essential to maintain the existing subway car fleet in a state of good repair, and provide fo timely replacement. The T1 fleet requires replacement as it reaches the end of its useful (30 year) life in 2026; this necessitates the procurement of 372 new passenger rail vehicles at a projected cost of $1,737 million.

These 62 trains are designated for the Bloor Danforth (B/D) line and will replace the remaining T1 fleet; however, the quantity does not account for any forecast growth in ridership beyond 2025. Also, extensive infrastructure funds may be required for the expansion and modification of the Greenwood Complex in order to accommodate additional growth. [Capital Budget “Blue Books” p. 680]

The timing of spending on this project is shown in its detailed budget. Note that about one third of the spending is post-2026 and therefore beyond the scope of the City’s ten-year capital planning window. From a budgeting point of view, it is useful to have the T1 replacement project a decade in the future because little of the spending would appear in the current ten-year projection. The flip side of this is that none of the currently announced support programs for transit spending by various governments look that far ahead. 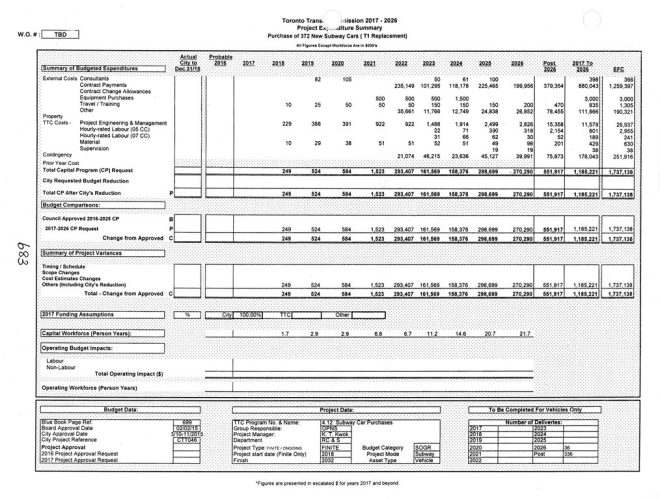 This plan does not align with construction plans in various ways:

Accelerating the provision of a new fleet would be challenging on the basis of a completely new tender and design, whereas resuming production of the TR trains would avoid the need for prototyping. However, this would only be possible with a sole source contract to Bombardier who are not the TTC’s favourite supplier at the moment. Moreover, the entire project would shift forward and add pressure to spending during a period when the City does not wish to incur any new debt to finance capital projects.

There is no funding in the City’s Capital Budget for these trains. The seven trains shown in the fleet plan for “SSE procurement” are not included in the SSE budget.

A New Subway Yard at Kipling

A large property southwest of Kipling Station, formerly a CPR freight yard, will be (or may already have been) acquired by the TTC for a new subway yard. Original plans for the BD line included a yard on the Westwood Theatre at the Six Points, but the TTC was dissuaded of  pursing this decades ago in favour of an Etobicoke Centre project that never materialized. (Only now, with the reconfiguration of this area back from a highway-style interchange to a local street system is this development actually taking place.)

There are a few problems with Greenwood Yard as a site for the T1 replacement fleet:

Before it can accept delivery of a new fleet, the TTC must have a new yard and shops in place. The project is described in the Capital Budget: 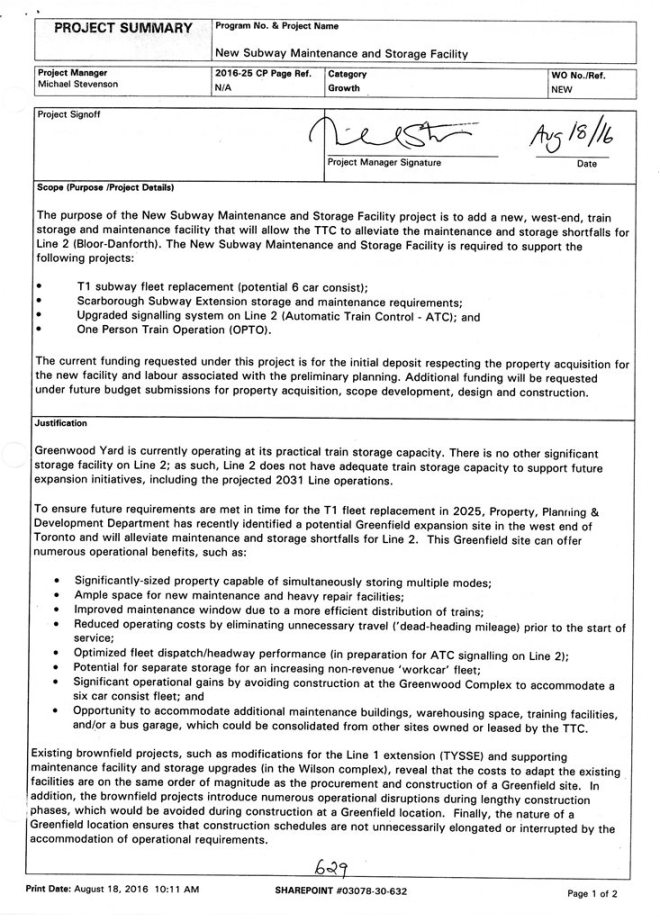 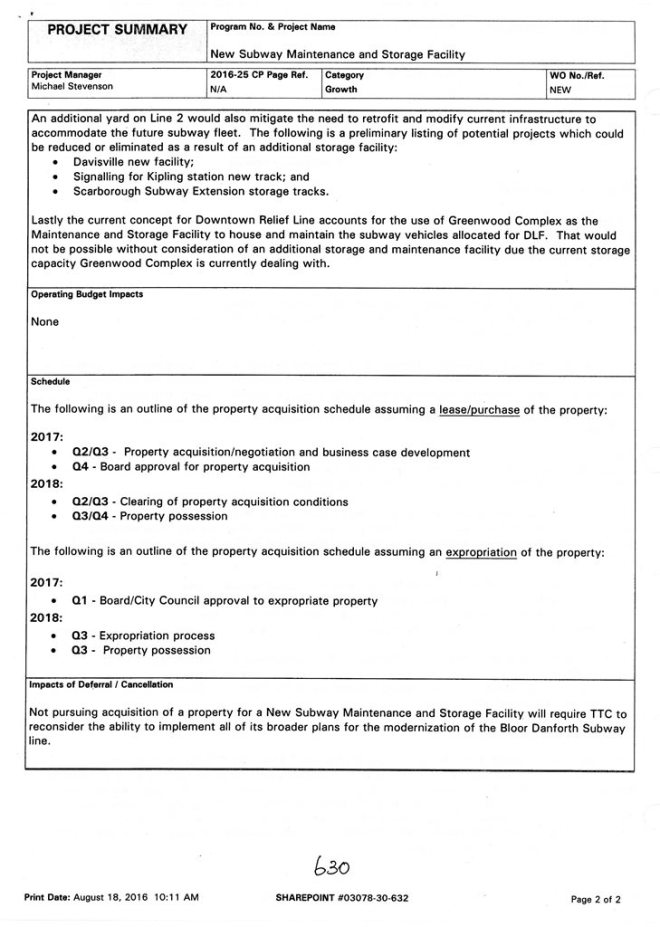 The Capital Budget contains only $7m to provide for property acquisition and preliminary planning. There is no funding for actually building the carhouse.

A small offsetting saving might be available in the SSE budget because planned storage tracks at STC station would not be required if there is a new yard at Kipling.

The future possible uses of Greenwood include:

Following completion of the ATC project on Line 1 YUS, the TTC will turn its attention to Line 2 BD. This work is planned over the coming decade:

This schedule fits well with opening the SSE in the mid 2020s by which time the entire route would have ATC signals. However, the T1 replacement plan as it now stands would not finish until about 2030 leaving an ATC system that could not be “turned on” because there would still be non-ATC trains on the line.

The approved budget for this project in 2016 was about $300m, but this has been reduced to about $251m based on a “capacity to spend” analysis that claims the TTC would not actually use all of its allocated budget. To complicate matters, the estimated cost of the project is now $431m. Therefore, the City’s 2017 Capital Budget only funds about 60% of the project.

A well-known problem at Bloor-Yonge is that the platform capacity on both the upper (Yonge line) and lower (Bloor line) levels, as well as the vertical connections between them, is not adequate to handle current demand under peak conditions. When delays remove the ability of trains on one level or direction to remove passengers arriving at a platform, congestion can be quite severe.

Plans for ATC operated trains on Yonge, and eventually on Bloor, will allow trains to run more frequently so that the service capacity keeps up with the arrival rate of transferring passengers, but that is only half of the problem. With trains arriving more often, the “feeders” into the station will also have more capacity, but the stations will not be able to absorb the additional circulation demands.

Indeed, the improvement of service on the Yonge line could trigger the need for better service on Bloor-Danforth simply to provide capacity to take passengers away from transfer stations at a rate matching the higher capacity of the Yonge line. (This also affects fleet planning.)

A few schemes have been proposed to add capacity in the past.

The first version would have involved closing Bloor Station for a period of construction and moving the tracks further apart so that a third platform could be inserted. This idea has, thank goodness, fallen off of the table, even though its initial stage, the widening of existing platforms, was completed years ago.

Another idea would see a new platform added at Yonge Station in a manner similar to recent construction at Union where each direction’s travel now has its own plaform rather than a narrow, shared central one. This too would be a complex project, but not as bad as attempting to relocate existing tracks. The end result would be the separation of passenger flow between eastbound and westbound platforms on the Bloor line. However, there are potential issues of constructability including conflicts with existing structures such as the Hudson’s Bay complex which physically surrounds the station. (Yonge Station’s “box” lies on a diagonal passing under The Bay which was built after the subway was completed.)

Beyond $6m for planning work, none of the estimated cost of over $1b is included in the City’s Capital Budget.

The question of platform edge doors (PEDs) comes up from time to time, and estimates that are now a few years old pegged their cost at about $15m per station. ATC is a prerequisite so that trains will be stopped accurately aligned to these doors.

The rationale advanced by the TTC for PEDs varies depending on the context:

The scope of a PED project depends on just which of these goals one is trying to address. If it is only a question of crowd control at major stations, then a system-wide implementation would not b required. However, if the goal is prevention of access to the track at all locations, then the scope and cost would be greater.

There is no money in the Capital Budget for PEDs, but any planning for such a project should be clear about its goals, and therefore the scope of work involved.

Other stations suffer from platform congestion, and this will have to be addressed as demand grows. A major side-effect of running more trains/hour with ATC is that passengers will be delivered to busy stations faster than they are today. The backlogs of would-be riders trying to board inbound from Finch to Eglinton in the AM peak could translate to overloaded platforms at stations without adequate exit capacity notably College and Dundas. There are plans for additional exits from these stations, but they depend on adjacent developments and public funding. (The chance for a north entrance/exit to Dundas Station was lost when no government would step up with the funds so that this could be built concurrently with the new Ryerson building at Gould Street.) Moreover, such exits should have capacity for large pedestrian flows, and not be treated as emergency stairway-only exits.

St. George Station is another interchange point where the volume of passengers on platforms and of conflicting movements between lines will grow as the level of service on either subway lines increases.

December 16, 2019: The article on the TTC’s 2020 Operating Budget has been updated info from the Board meeting debate. See the Postscript for the new material.