The 514 Cherry streetcar had its official opening on June 18, 2016, although regular service will begin on June 19 at 7:45 am. The route will operate between the new Distillery Loop near Cherry and Mill Streets in the Distillery District and Dufferin Loop at the western entrance of the Canadian National Exhibition grounds.

This is only the beginning of what should be a much larger network in the eastern waterfront, but work on that stalled thanks to the previous administration at City Hall. The impetus to restart on a serious basis will be funding of the Don River realignment and the active development of the land south of the railway corridor. Some idea of the potential network is shown in the following illustration from the Gardiner Expressway realignment study.

Cherry Street will be realigned south of the railway and will cross the Keating Channel on a new bridge including provision for streetcar track. New track along a realigned Queens Quay East will meet up at Cherry and provide the link to Union Station. Also shown (dotted) below is the proposed southerly extension of Broadview Avenue including streetcar track from Queen to Commissioners Street (out of frame below this illustration). Track on Commissioners would link east from New Cherry Street at least to Broadview and thence to Leslie Street and the southwest corner of Leslie Barns. 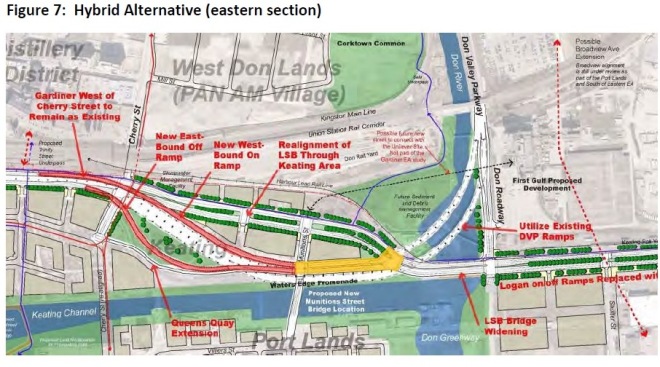 For the occasion, five streetcars were on hand:

4421 laden with many passengers and a few politicians set off from Distillery Loop after the usual speechifying such occasions bring, and made a round trip to Dufferin Loop. On its return, the original four cars were still waiting, but in due course the whole parade set off back to the carhouse.

An amusing note from our journey was that the car stopped at (and even announced) most of the stops along King Street that are scheduled to be taken out of service on June 19. This will be the only time that a 514 Cherry car served those stops. No, we did not have a photo op at each one to mark its passage.

Already there is word that operators are displeased with the absence of a loo at Distillery Loop. It’s a shame the Canary Restaurant isn’t still in business at Front Street where streetcars stop right at the door. I suspect this would have been a favourite layover point.

Looking south to Distillery Loop and the Cherry Street tower for the rail corridor (now decommissioned).

Nortbound on Cherry at Front Street

Northbound on Cherry at Front Street

The TTC appears to be slightly confused about the location of the eastern terminus of 514 Cherry. According to the schedule website, this would be Cherry Beach Loop which is somewhat further south across both the Keating Channel and the Ship Channel, a lot sandier, and notably without any track. Not even any Swan Boats. 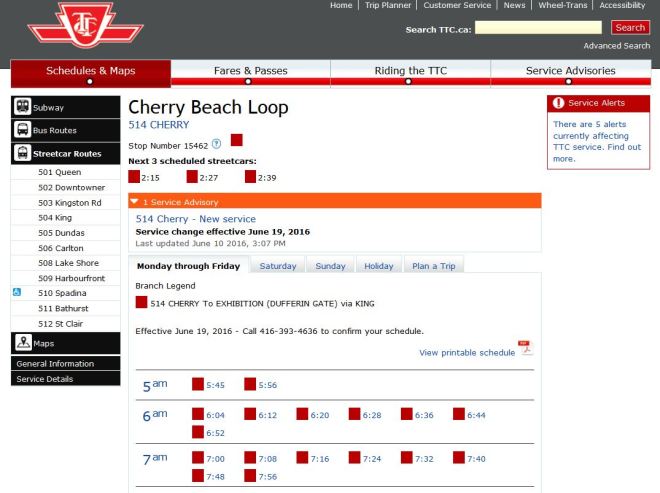 February 21, 2020: The article on the Eglinton Crosstown chronology has been updated with additional information from Metrolinx.