According to earlier plans I had heard through Waterfront Toronto, Cherry Street Loop was not to be completed until after the Pan Am Games because the site is part of a parking lot for buses.  Contrary to this story, the loop is under construction, albeit surrounded by a parking lot.

The now-inactive Cherry Street tower that once controlled the eastern approach to Union Station sits at the south end of the loop.  In the left background, behind the trees, is the GO Don Yard.

The terrible irony about this, our possibly newest streetcar line, is that it won’t actually see service until Spring 2016, and the proposed extension under the railway to connect with a Queens Quay East line isn’t even in the current list of projects awaiting funding.

The intersection of Cherry & Eastern will be closed from Friday, August 2 at 9:30 am until Tuesday, August 5 at 5 am.  This will allow reconstruction of the intersection including the installation of streetcar track.

The first streetcar line into the eastern waterfront began to appear recently with the reconstruction of Cherry and Sumach Streets south of King.  Pre-welded track strings for this section have been waiting for over a year, but are finally moving to a new home in the middle of the new “Canary” district.

The West Don Lands, a long-fallow area of abandoned and polluted industrial sites, will become the Athletes’ Village for the Pan Am Games in buildings that will become a new “condo village” once the games are over.  The Cherry Street branch off of King Street will run south to a loop just north of the rail corridor immediately north of the old Cherry Street “tower” for the eastern approach to Union Station.

On March 30, 2013, the new Cherry Street was just beginning to appear.  Here we are looking south from Eastern avenue.  The traffic signals are at the future intersection with Front Street where the old hotel that housed the Canary Restaurant sits on the southeast corner.  The concrete in the foreground is the base for the new roadway, and the space east of that will become the streetcar lanes.

By July 16, track had been placed on the east side of Cherry and construction of new buildings is well underway. 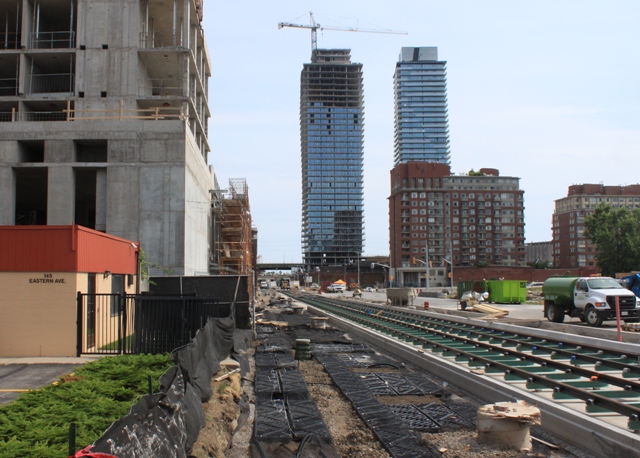 By July 21, the track has been assembled.  Also visible here are the covers of pits under the future sidewalk that are designed so that tree roots will be able to grow properly.

Looking south from King Street on Sumach Street under the ramps linking Eastern Avenue and the DVP to Richmond and Adelaide Streets on July 16.  Construction of the new Cherry Street roadway is in progress.  The space on the left (now paved) will continue the streetcar corridor north to King.  The connection to King will be installed in 2015, and the line will become active in spring 2016.

Below are two views taken on July 21 of the former Cherry Street Hotel whose history was provided in a comment by a reader, DavidC:

Traffic signals are in place at the future intersection of Cherry and Mill Streets, and the streetcar track is visible in front of the hotel.

Another view from the southwest with the TTC Streetcar Way tent in the foreground and new buildings sprouting in the background.

This route will not come into its own until a connection south to Queens Quay East, a project that does not have a firm date or funding.  The view below looks east to Cherry Street Tower on the north side of the rail corridor.  The streetcar loop will eventually go just to the north (left) of the tower.  The Cherry Street underpass must be widened with an additional span to give enough room for streetcars, autos, cyclists and pedestrians to fit under the rail corridor to Lake Shore Blvd.

June 3, 2020: Reviews of Prayer For a Lost Mitten, There’s No Place Like This Place, Anyplace and Judy vs Capitalism added to the HotDocs 2020 post.