The Toronto Transit Commission, at its recent meeting, approved a contract for the connection track linking the existing streetcar system on Queen Street via Leslie Street to the Leslie Barns located between Lake Shore and Commissioners.  Much comment turned on the rising cost of the facility and the unexpected cost of work such as soil and utility relocation.  To put all of this in context, here is a short history of the evolution of this project.

In March 2007, the Transit City plan was announced with a proposal for seven new LRT lines of which the first two, Sheppard East and Finch West, would have opened in 2012  and 2013 on the original schedule. 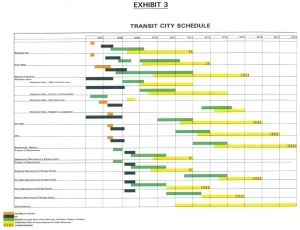 Beyond the suburban LRT expansion, the TTC knew that it would be expanding the fleet of the existing “legacy” streetcar system, and the combined system would require several new carhouses and maintenance facilities.

In April 2007, the TTC awarded a contract for the development of a master plan for streetcar maintenance facilities.  This study produced an update report in May 2008 (the covering report is not available online). 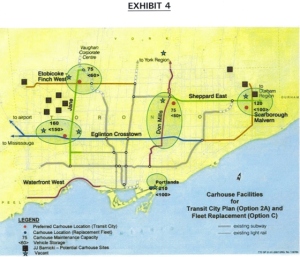 Note that the location for a new downtown carhouse is shown in the Port Lands at roughly the location of what would become Leslie Barns.

At the time, the network was all to be built to TTC gauge, and there would eventually be full interconnection of all parts of the system.   However, Transit City was an aggressive plan, especially as regarded funding.  With the world financial crisis of 2008 and a recognition that the total cost of Transit City would be higher than first estimated, the entire schedule was pushed back and eventually taken over by Metrolinx.  However, the need for a new facility on the legacy network remained.

By May 2009, the TTC had conducted a site selection, although it was clear that the Leslie Barns site had always been their favourite spot.  Fourteen sites were examined, and of these six were found to meet the selection criteria (numbers 1-6 on the map below).

A notable exclusion from the final list was the Lever Brothers site at the foot of Broadview Avenue.  This will re-appear in a future report.

Of these six sites, four are self-evidently non-starters given their remote location relative to the existing system, and the debate really came down to the Ashbridges Bay site (1) and the Eastern Avenue site (2), although the TEDCO site on Unwin Avenue (3) stayed in the running through a more detailed design process.  The Eastern site was less-loved than the Ashbridges site given its proximity to the Film Studio district and the need for an access track through a residential neighbourhood.

The Commission approved a confidential property acquisition report for the Ashbridges (Leslie Barns) site even though the public consultation to present the site options would not take place until mid-June, 2009.

This decision did not sit well with some in the local communities for various reasons:

At this point, there had not been an Environmental Assessment nor any detailed review of utility relocations needed for this site.

The purchase of 204 new Low Floor Light Rail Vehicles (LFLRVs) was approved by City Council in the summer of 2009, and the expected arrival of the new fleet in 2013 drove the requirement to have a new maintenance facility in place.  This schedule has slipped by about a year in part due to uncertainties over the LFLRV purchase thanks to the election of Rob Ford as Mayor in fall 2010.

In December 2009, the TTC formally approved the Ashbridges location for the new facility, and debate then turned to the access route cars would use to reach the carhouse.

In June 2010, the draft Transit Project Assessment Study (TPAP) was before the Commission, and it included an evaluation of various alternative routes, but did not include one that was put forward by the local Councillors with my support (a route via Eastern and Knox that would access Queen Street through Russell Yard).

Without rehashing that entire issue, the nub of the TTC’s preference for a straight route down Leslie Street rested on the following considerations:

Funding of $345-million had been provided in the 2010-14 Capital Budget, but this did not include provision for soil removal and site remediation, nor for the connection track to Queen Street.  Problems with the soils were clearly identified in the TPAP [see pp 6, 17 & 18 of the report].

The TPAP process was expected to continue through the fall 2010 with a final report in December, although this period overlapped the municipal election that would bring a new Mayor and a new Councillor to the ward in which the carhouse was located.

Also on the agenda in June 2010 was a report regarding the Unilever site (“Lever Brothers”) that had been rejected earlier in the evaluation process.  During the site survey in 2008, this location was rejected because the land was partly entailed by existing leases, and its availability was uncertain.  By mid-2010, control of the site was again in the landowner’s hands (UL Canada), and the TTC again reviewed the property.  Although it was not on the market in 2010, the site was sold for a condo development in 2012.

The TTC noted that the existing buildings and previous uses of the site would require demolition and cleanup, although there was no estimate of the magnitude of this cost.  A potential delay of up to three years (to 2016) was cited if the project were shifted to this site, and a cost premium of about 20% was expected including an unspecified amount for the longer connection track from the Lever site to Queen compared with the Leslie/Ashbridge link.

In December 2010, a new TTC with a decidedly different political slant on this project considered a report on the soil removal and capping at the Ashbridge site.  The contract itself was for $51.4-million, but other cost escalations required a total of $89.7m in additional project funding (bringing it up to $435m).  Debate on the item was vigourous, and the item was deferred to allow staff to bring additional information to the table.  [The $435m figure is later referenced as $437m, and I suspect the lower number is due to rounding of some amounts quoted here.]

In February 2011, a follow-up report noted that there had been ongoing consultation with local Councillors including consideration of various alternative sites for the new MSF.  The original plan to proceed with the Ashbridge site was confirmed, although the Commission did instruct staff:

to investigate the feasibility and costs of locating some of the new streetcars at the Hillcrest yard and/or the adjacent hydro corridor and exhibition place loop recognizing that additional streetcar storage at alternative sites does not change the need for the Ashbridges Bay Streetcar Maintenance and Storage Facility. [from Minutes of the meeting]

In July 2011, staff reported back with an update on various issues:

In November 2011, the Commission approved work by Hydro One at a cost of $15m to relocate a high voltage cable passing through the MSF site.  This cable had been identified in the TPAP report.

In January 2012, the Commission approved the main contract for the MSF in the amount of $237m.

In May 2012, the Commission amended the existing design contract with AECOM Canada by adding $10m to the previously spent $28.7m.  Among the pressures for increased were the work involved in studying many alternative schemes for the MSF itself, lengthy work on site plan approval, and additional scope of work for streetscape improvements and utility relocation.

All three of these contracts are funded from the base project budget, as amended.

In March 2013, the Commission approved a contract for the Leslie Street connection and associated work including utility relocation and streetscape improvements at a cost of $105m.  A further increase in the project budget of $50-60m will be sought from City Council bringing the total up to $497m (over the earlier $437m) within the 2014 budget.

A big chunk of the increase comes from the need for new Toronto Water infrastructure under Leslie Street where an old wooden watermain, now roughly 70% silted up, is too close to the surface for the track slab to sit above it.  Although some early discussions of this work had talked of Toronto Water paying 80% of the cost of a new main (given that the existing plant was at roughly 80% of its useful lifespan), this source of funding is not mentioned.

This is certainly an issue for the 2014 budget given that Toronto Water has its own source of capital funds through the water rates and would have to rebuild this old main in any event.  The approval motion includes:

2. That the TTC request the City Manager to ensure that the infrastructure that the City requires to be implemented in conjunction with all TTC projects is clearly identified to the TTC early in the project planning and is budgeted for in the appropriate City Division budget.

The original project had an estimated cost of $345-million in 2010.  This grew in part due to project delay, and in part due to underestimation of the cost of site remediation at the chosen Ashbridge (Leslie Barns) property bringing the total up to $437m.  Further additional design work and change in scope brings the likely total to $497m.

Although some of this might have been avoided with the selection of another site, the larger question is the degree to which a credible “all in” cost estimates should have been produced earlier in the evaluation.  Other options ruled out of consideration might not have ranked as poorly with better up-front knowledge.  Much of the debate turned on the fact that the Ashbridge site was the preferred location quite early in the process, and the design proceeded on that basis even before it was formally selected.  There was an air of inevitability, and this is never a sign of good faith in “public consultation”.

That said, the newly named “Leslie Barns” was something of a political football with Councillors competing to show who was best protecting their neighbourhood.  The overlay of anti-streetcar, anti-Miller bias at City Hall was exploited to gain prominence for a debate on the carhouse that was a thinly-veiled attack on the new streetcars and continued surface rail operations in Toronto.

We are now past this debate, and construction will proceed over 2013-14.  Now the TTC must make good on the capacity increases it spoke of for the streetcar network back when the LFLRV order was planned.

15 thoughts on “The Saga of Leslie Barns”