The TTC unveiled the real car 4400 — not the imitation, half-car mockup seen on an earlier occasion — at its Hillcrest Shops today to a crowd of press, politicians and staff.

Van Loan’s inclusion was rather odd considering that his government famously told Mayor David Miller to get lost (in somewhat earthier terms) when Miller asked for a 1/3 federal share in funding these cars.  Now we learn than some of the federal gas tax transit revenue in Toronto has been earmarked for the streetcar project.

In fact, Toronto gets a flat annual allocation from the federal gas tax that now runs at $154m.  In 2012, the total TTC capital spending (not including projects with their own accounts such as the Spadina extension) will be $1,034m.  This puts the federal gas tax at about 15% of current spending although the proportion rises in future years when the currently planned rate of spending tails off.

I have asked the TTC to explain how they came up with the $108m figure, and as I write this (2:20 pm, November 15), I have not received a reply.  Federal capital grants go into the general pot of capital funding (see pdf page 36 of the TTC Capital Budget).

During her remarks, TTC Chair Karen Stintz joked that she hopes to see Van Loan back soon with a big cheque for the Downtown Relief Line.

This is a fully working car, although we won’t see it out on the street for several months, and even then only for test runs, not in passenger service.  Cars 4401 and 4402 will arrive over coming months to add to the test fleet.

The 4400 sat among representatives of three earlier generations of streetcars each of which represented the technological pride of its age — the Peter Witt (1920s), the PCC (1930/40s), the CLRV (1970s).  That CLRV (and its relative, the articulated ALRV) is odd man out, in a way, because it was, in part, the product of an era when Ontario thought it needed to reinvent the streetcar.  Only one other buyer was ever found for these vehicles as compared with Witts, PCCs and now Bombardier Flexities running all over the world. 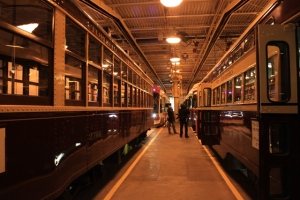 The car’s interior is divided into sections, each with its own door very much like a subway car.  All-door loading will spread out the demand through the interior.  Space dedicated for large objects such as shopping buggies, baby carriages, wheelchairs and bicycles will allow them to be carried without plugging circulation.

Although the cars are “low floor”, there is still one step up from the ground into them unless one boards from a platform or widened sidewalk (as on Roncesvalles).  However, that’s the only step, and riders will be able to flow into and out of the cars quicker than they do on the earlier models.

Presto readers are mounted on either side of the entryways.  The rules for Presto use on TTC are not yet decided including whether there will be any need to “tap in” for transfer connections or to “tap out” when leaving a vehicle.  [That’s a separate debate and I would prefer that the comment thread on this article not fill up with a discussion on that topic.]

Visible in the photo below is a small pedestal (left side, just ahead of the articulation) which will hold the fare equipment.  This will be used by passengers who need to pay a cash or token fare while the system is in co-existence mode between current practices and Presto.  Machines will also be provided at busy stops along the routes as the new cars roll out.

The box under the pedestal is a heater/blower (another is located under the seat just inside the door) whose purpose is to keep the vestibule warm even in the winter and an attempt to dry out the floor.

Stop displays hang from the ceiling through the length of the car, not just at the front as on the retrofitted CLRV/ALRV fleets.

Notable by their absence is any provision for advertising on either the interior or exterior of the car.  Something may be fitted in the coves between the top of the windows and the lighting strip, but there is nothing on the 4400.  This would change the look of the cars inside and out. 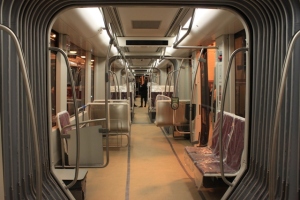 Here is another view through the articulation showing the fare machine pedestal.  Note that the window has a separate panel at the top.  This is a “flip in” window similar to those on the CLRVs intended for situations where the AC fails and some ventillation is required.  The flip-up seating in the area beyond keeps it clear for use by wheelchairs in a similar format to that already used on the subway.

At the doors, there is a red button for passengers to open them when they are activated by the operator.  Actual operation will likely vary from stop to stop and car to car just as it does today with the CLRVs.  At some stops, the operator will simply open all doors; at others, only doors passengers want to use will open.  This is a common practice elsewhere to which Torontonians will, I am sure, adapt.

This door is also the wheelchair location, and the blue button is intended for a request to deploy the wheelchair ramp.  That ramp has two levels — one is a short bridge to get from a car to a nearby platform, the other is a longer ramp to get down to pavement level.  The operator controls which version is deployed.

Not visible in these photos is an LED strip mounted on the trailing edge of each door.  This will be brightly lit when the doors are open as a warning to passing motorists and cyclists that they should stop.  I hope to get a photo or video of this in operation from the TTC and will add it here when available.

Low-floor design brings seating above the wheel sets, and a mixture of forward and rear facing seats. 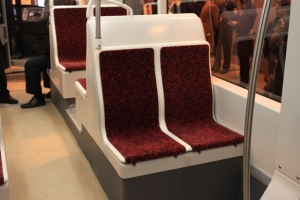 The front of the new car, in profile, can be read as a face, here in contemplation of a human.  The paint treatment at this end is different from the rear (see the next photo) with the white stripes swinging down.

The rear end of 4400 seen from the transfer table.  The white stripes at this end simply wrap around the car.

Finally, a view along the runway for the transfer table that moves cars and buses between the shop entrance and the various repair bays.  The mockup version of 4400 is visible in the middle distance. 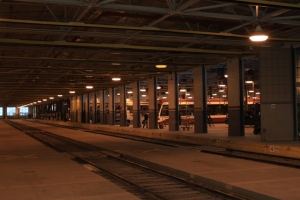 I must say that having a genuinely new streetcar in Toronto, one that is based on a proven international design, gives me good feelings.  All the same, there remain questions of how the vehicle will perform in service, how riders will adapt to the new layout and fare collection tactics, and whether the TTC will actually improve service capacity (as implied in the Fleet Plan that I reviewed recently) and improve line management so that expected wider headways are not compounded by ragged service and short turns.

The fight for better streetcar service is far from over.

Postscript: What The Design Panel Did

I was one of the members of design review panel recruited by the TTC to tweak the new car design.  The physical layout of the cars was more-or-less settled by the time we came on board, and our opportunity for influence was limited.  The factors we affected were mainly aesthetic including:

One thing we hoped to see was interior surfaces that had some texture and variation from lighter off-white on the ceiling to a darker gray on the floor.  That idea did not become part of the final version probably for a combination of cost and maintenance issues.

Eventually the cars will go into service and we will see how their layout works in practice and whether it can be improved.

An idea I would particularly like to see would be a subset of the fleet as “art cars”.  We came up with this idea before GO Transit started its own program, but given the state of transit funding and municipal attitudes to non-essential “gravy”, this was an idea that has gone into a deep sleep.  Could we find a sponsor to underwrite a competition for, say, ten cars each with its own “total wrap”, a set of “one of” cars whose designs would change from season to season, year to year?