The TTC and the Economic Mission of France in Toronto will host a presentation Building LRT in a City of Subways on Friday, September 5 at 6:30 pm in Committee Room 2 of City Hall. 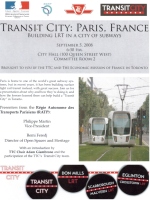